I had been eagerly awaiting my new unit of inquiry for sometime. Since changing the Central Idea and Lines of Inquiry from the previous year I quickly recognised that the new inquiry was a perfect opportunity to allow student-agency to flourish. Like many I have been impressed with many of the approaches to teaching and learning already demonstrated by many schools that have allowed student-agency to flourish. I have been looking forward to an opportunity to implement, adapt and create these kinds of opportunities within my own practice. It has not been an easy decision working within an early years setting. What changes were possible? How would the children react? I also needed to be clear of how the changes would benefit the students rather than using this as an opportunity to experiment.

In the end I am a committed believer in the necessity of student-agency to flourish and the benefits it brings. And so, I made a commitment to both my students and myself that I would allow the new inquiry to be driven solely by student-agency allowing for changes in systems and structures that would remain for the rest of the academic year. 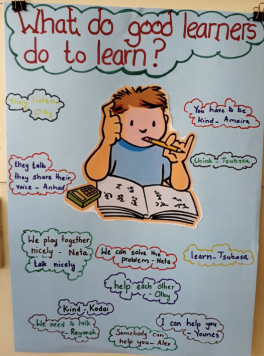 The central idea to my new inquiry is ‘A School Community is Organised to Meet the Needs of the Learner. I had changed last years Central Idea from being concerned with the local community to being centred on our school community. One reason being was that due to traffic in Bangalore and the location of the school it was quite difficult for us to engage with or visit many of the places that I would have traditionally taken my class e.g. hospital, fire stations, libraries etc. Due to these circumstances, and the early finish of my students, it was difficult to create authentic engagements with many aspects of our local community. It is important for the students to learn through doing rather than just by pictures and books. I also saw the change in the central idea as an opportunity for the children to recognise their place as learners within the school community and to develop greater independence and responsibility for their learning. I saw the ‘Why’ of our inquiry as the children beginning to recognise themselves as learners and the processes they went though.

In the week before our school holiday and a week before we were due to start our new inquiry we had begun to discuss what the children enjoyed about our school and our learning environment in particular. We thought about what a classroom Must, Should, and Could have. These would become the driving choices throughout our inquiry and also provided a pre-assessment of the children’s knowledge and understanding of their learning environment. The children’s ideas were then written on different coloured post-it notes with the intention that they could be re-visited and moved throughout the inquiry and provide a visual record of the children’s changing perspectives with regards to their learning environment. The work could also be used as a reflection during future learning experiences.

Working within an IB World School I have been motivated by the increased importance of student-agency within our curriculum. Believing that agency is something that cannot be given but only taken away I have increasingly thought about the barriers within my own practice that are restrictive to student-agency. Since the start of the school year I have been fascinated to watch other educators begin their year with an empty classroom and allowing students to create their own learning spaces. This would have been something that I was eager to do from the beginning of the year but I considered that it may be too challenging for such an approach within an Early Years class. I believe that with our young learners it is important to develop relationships and make connections before we can move on. And so I waited until my second inquiry before attempting such a bold move. We even waited until the Friday of the first week back to completely empty the room. We had started to take down displays and move other items throughout the week which worked quite well. It helped to develop conversations and discussions as the children started to notice the changes. Throughout these discussions we were able to reflect back on our previous thoughts about what a classroom must, should and could have and develop our ideas.

And so after days of clearing the classroom item at a time the children arrived to school on the Friday to find a completely empty classroom. We had removed all the furniture and resources to the garden outside. We had thought that if we had simply moved everything to one side of the classroom it would have influenced the children’s decision making with regards to the new organisation. We thought that it would be better to start with a blank canvas.

Throughout the day we engaged in conversations and decision making about how to best to organise the classroom. It was really interesting listening to even our young learners making decisions based on logic e.g. “We can’t put that there because we won’t be able to see our board”. It was also a wonderful experience as we explored our classroom resources. It provided an opportunity to explore each of our resources and how they could be used to support learning. In the past, without such an investigation, many resources would have remained on the shelves due to either the children not knowing we had them or not knowing how they were used.

Even though I had been excited to begin our new inquiry I did have some reservations. It would require us all to really step outside our comfort zone by beginning from scratch months into the new year. I suppose if we always do what is comfortable we would never do anything of value at all. I also had concerns about the children creating a classroom environment that was difficult to work in and had visions of weeks of rearranging furniture and resources as we re-evaluated our choices. Now after several weeks being in the newly organised classroom I have been pleasantly surprised with the arrangement. A lot of the worries I did have were needless.

Once the children had finished organising our classroom we began to think of the specific needs of the learner. We started by asking questions like, ‘What do writers do? What do readers do? What do Mathematicians do? For each of these questions we concentrated on the process of each rather than the specific skills needed. Through these discussions we created specific learning areas to support the needs of the learner. We have had a wonderful response from the children. They began to think of themselves as writers, readers, mathematicians and enthusiastically engaged in independent and guided learning activities. They clearly demonstrate greater pride and accomplishment in their work in a setting created by the students for the students. True ownership of learning was happening and it was exciting to be a part of. 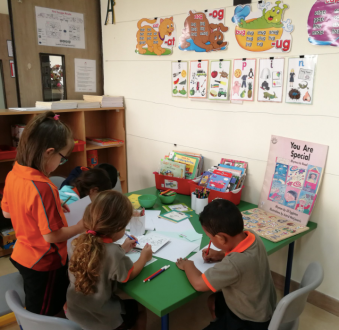 I have since been talking with our schools visual art teacher who follows the teaching strategy ‘Teaching for Artistic Behaviour’ (TAB). The concept being that students learn about art and the art world by assuming the role of artist and directing their own learning. I wondered if this strategy could explain the success that I had been witnessing within my own class, especially within language. The children have learned about writing by assuming the role of the writer and directing their own learning. By the results I have seen in the classroom I would strongly argue this was so. Students learn best and work harder when they are excited by what they are working on. And when they design their own work, they understand why they are doing what they are doing and engage much more deeply with their learning. The time taken to allow the children to create their own spaces as proven to be extremely beneficial and developed an increased sense of independence and enthusiasm.

understanding of letter sounds? Write words? or even sentences? A lot of our discussion had been around next steps. What are we confident about and where to now? Soon I found myself having really meaningful conversations about goals and next steps that I had not found possible with an early years class before. Especially after the initial setting up of the area many of the children were enthusiastic about demonstrating their knowledge and understanding. So when they approached with their papers containing lines of scrambled letters we discussed the where to now with reflection on our learning goals.  This has been a work in progress and we are looking at ways to improve the idea with a view to extend this into other areas of learning.

Since the beginning of our inquiry I think that one of the biggest game changers in allowing agency to flourish has been our approach to our daily timetable. In the first week of the inquiry we had given ownership to the children to choose when they did specific learning activities like Maths or Language. We felt that this too was still restrictive and they needed greater ownership of their daily routine. We changed our daily timetable to follow our choices of Must, Should, Could. The first creation of our new timetable was completely teacher driven as we wanted to model how the new timetable would work. We discussed the restrictions to allowing complete freedom e.g. we must go to specialists, certain activities outside our control and as a teacher there are certain things that I must do. Then there were the activities that we should do to support specific learning outcomes e.g. we should spend time developing or writing or counting. There are also other activities that the could do to develop their understanding of the world that may not have specific links to our daily learning e.g. use block to build a castle etc. After the first week of the new modelled routine we allowed the children greater choice in its creation. The timetable has now become more visual to support the Early Learners and the children are able to express their opinions of activities that can be included in both the should and could. Eventually we would like to give full control in the daily schedule, with teacher guidance of course.

The inquiry will now continue until the end of the year and we will continue to modify and change our practice to benefit our learners. We will also continue to search for more opportunities for student-agency. This is just a part of the journey but it is clear that the journey has certainly begun. The experience has demonstrated excellent results so far in terms of student engagement, independence and enthusiasm for learning. They are clearly beginning to understand how they can express their choice and voice to make a positive impact in their ownership of learning. They are quickly making the transition from learners to leaders of the learning, recognising their own contribution to the process.

I am an Early Childhood educator currently working in Thailand. As an experienced, and proud member, of the international learning community I enjoy the challenge and seek opportunities to support positive sustainable change to a community. I am passionate about providing innovative experiences for students to authentically engage in the whole creative thinking process; to make meaningful connections to the world around them; to solve problems; to develop a mindset for agency and responsible choices; and to develop their own voice. View all posts by David Gostelow

1 thought on “From Learners to Leaders”